Cecil Collins was perhaps Britain’s most important metaphysical painter, along with William Blake. He began drawing his native Devon landscape at an early age, studying at Plymouth School of Art from 1923 to 1927 and at the Royal College of Art, London, from 1927 to 1931, in both cases on a scholarship. His student work, although suggesting something of his later desire to probe beyond appearances, remained essentially naturalistic. In the early 1930s he began to be influenced by Klee, Picasso and briefly by European Surrealism. His first one-man exhibition was held at the Bloomsbury Gallery, London, in 1935, and in 1936 he participated in the International Surrealist Exhibition, London. He soon, however, forswore any formal allegiance to the Surrealist movement, thereafter remaining a somewhat isolated and solitary figure within the British art world, although he is often labelled a Neo-Romantic. A major retrospective of Cecil Collins’s prints was held at the Tate Gallery in 1981 and again in 1989. His archetypal images are those the poet, the angel and the Fool, shown in this particular print which shows the Fool, who is often present in Collins’ work, where he embodies the saint, the artist and the poet. 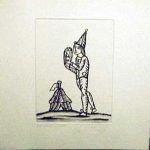 A Fool carrying a Child

signed, titled, dated and numbered 18/48 by the artist in pencil