Carel Weight was a painter of portraits, figures and townscapes, often with religious or literary subjects. Born in London, he studied at Hammersmith School of Art 1926-29 (where he met Ruskin Spear) and Goldsmith’s College 1929-32 under Gardiner, Mansbridge and Bateman. He formed a friendship with Kokoschka and exhibited at the RA from 1931, becoming RA in 1965.

He was an Official War Artist 1945-46, a tutor 1947-57, then Professor of Painting at the RCA, 1957-73, where he was made Professor Emeritus in 1973 and Senior Fellow 1983. He was awarded a CBE in 1962 and an Honorary Doctorate from Edinburgh University in 1982. He became one of the most popular of all teachers at the Royal College of Art. His pupils included David Hockney, Peter Blake, Ron Kitaj amongst others who went on to be hugely influential artists this century. He was a close friend of many artists and was influential in ensuring Lowry’s election to the Academy.
Carel Weight exhibited widely and his public commissions have included murals for the Festival of Britain in 1951 and “Christ & The People” for Manchester Cathedral 1963. His work is represented in a number of major collections, including that of HRH Queen Elizabeth, the Tate Gallery, The Fitzwilliam and Ashmoleon Museums, the Imperial War Museum, the Vatican collection and the British Museum. In addition, his work is highly sought by private collectors. 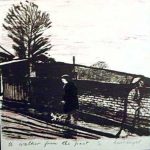 The Walker from the Past

signed, titled and numbered 18/48 by the artist in pencil