Bryan Pearce was born in St Ives, Cornwall in 1929 and died in early 2007. He was diagnosed with Phenylketonuria during his childhood, a condition which affects the normal development of the brain. Encouraged by his mother who was herself a painter, and then by other St Ives artists, above all Peter Lanyon, he began drawing and painting in watercolours in 1953. From 1953 to 1957 he attended St Ives School of Painting under Leonard Fuller, and after this apprenticeship he began painting in oils and started to exhibit at the Penwith Gallery. He was elected member of the Penwith Society of Artists and was also a member of the Newlyn Society of Artists; his first solo show at Newlyn Gallery in 1959 was organized by Lanyon. Lanyon wrote of him: “Because his sources are not seen with a passive eye, but are truly happenings, his painting is original.” Pearce has become one of the country’s most popular ‘naive’ painters, well-known for his St Ives and other Cornish landscapes, which are often compared to those of Alfred Wallis. In the early 1970s Pearce began to make small etchings with the assistance of fellow artists Breon O’Casey and Bryan Ingham, and later Roy Walker. Since 1976 a number of his oil paintings have been made into limited edition high quality screenprints, in order to bring his distinctive images to a wider public.

Pearce worked slowly, but consistently, producing perhaps twelve oil paintings a year. Over the past 40 years he exhibited widely throughout the country, including at the New Art Centre, Victor Waddington Gallery and Stoppenbach & Delestre in London; Beaux Arts in Bath, Wills Lane Gallery in St Ives, and at the Oxford Museum of Modern Art. Public Collections include: the Tate Gallery, the Arts Council, the Contemporary Arts Society and Kettle’s Yard, Cambridge.

Bowl of Fruit and Peppers 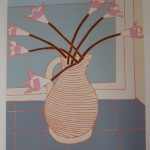 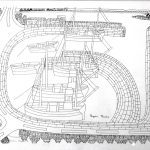 signed and dated ’76, numbered from edition of 75

‘Newlyn All Round’ is one of Pearce’s earliest screenprints and was printed in black line only. 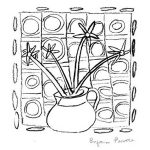 signed and dated ’04, numbered from edition of 100