Bridget Riley, perhaps Britain’s most important living female artist, became famous during the 1960s as a leading exponent of ‘Op’ Art, in which surface-pattern creating optical effects of volume, movement and rhythm take the place of depth, three-dimensionality and representation. Her art makes, as Gray Watson writes, “any fixed image impossible for the spectator and substituting instead a constantly shifting perceptual experience of dazzlingly direct physical intensity” (G. Watson, in British Art in the 20th Century, Royal Academy of Arts, London, 1987, p. 444).

Riley’s paintings from the early 1960s were exclusively in black- and-white and colour only entered her work after 1966. Her use of colour has become ever more vibrant, indeed strident, over the last three decades, just as her fame and status as one of the greatest living abstract painters and graphic artists has grown. In Frieze, a dynamic counterpoint is created between tangerine orange, mid-blue, grass green and cream. The overall visual effect is of fronds or foliage blowing in the wind against a watery background.

Riley has been included in many major exhibitions since the late 1960s, including solo shows at the Museum of Modern Art in New York and the Hayward Gallery in London. She is a truly international artist who has found great success both sides of the Atlantic. 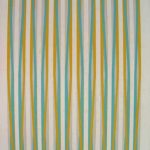 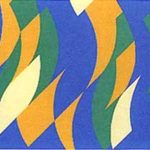 signed, titled and numbered from the edition of 200 and dated ’00 by the artist in pencil