Bill Jacklin studied graphics at Walthamstow School of Art from 1960-1961 before working in London as a graphic designer. From 1964 to 1967 he attended the Royal College of Art, London. Between 1967 and 1975, Jackin taught at Chelsea School of Art. He was awarded a bursary by the Arts Council in 1975. During the 1970s and 1980s numerous solo shows were held of his work with Marlborough Fine Art. Commissioned projects include the Bank of England, De Beers and the Ivy Restaurant, London. 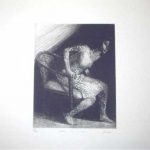 Woman in a chair

signed, titled and numbered 18/48 by the artist in pencil