Bernard Dunstan studied at the Byam Shaw School of Art and later at the Slade School. He taught at a number of art schools including Camberwell, Ravensbourne and Byam Shaw over a period of thirty five years. He was elected a member of the New English Art Club in 1947, the RWA in 1949 and became its president between 1979 and 1884. He became a full member of the Royal Academy in 1968 and is currently a Senior Academician.

His work has been widely exhibited in group shows at the institutions of which he is a member and he has also had solo exhibitions at the Roland, Browse and Delbanco Gallery in London and at Agnews. The Oriel 31 Gallery held a retrospective exhibition in 1988. Examples of his work are in numerous public collections including the London Museum, Arts Council, and Tate Gallery. 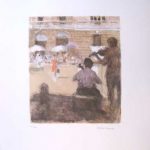 Musicians in the Courtyard

signed and numbered from the edition of 200

This print, one of a series of four showing views at the Royal Academy was produced to celebrate the 200th anniversary of lithography.