Barbara Mildred Jones was born in Croydon on Christmas Day in 1912. She studied Mural Decoration at the Royal College of Art after attending Croydon High School for Girls and Croydon Art School. A muralist, landscape painter and illustrator, Jones came to belong to the distinctive group of artists and illustrators which included John Piper, Edward Bawden, Eric Ravilious and Edward Ardizzone. A prolific artist of diverse talents, she is particularly celebrated for her depictions of buildings. Her images convey the character and feel of a place with pleasant, natural ease.

Jones’ wide range of projects included numerous paintings for the Recording Britain project during WW2, book illustrations in paint or pen and ink, and painted murals for both the Festival of Britain and several liners during the 1940s, ’50s and ’60s. She also contributed several painted title-pages for the About Britain series (published in 1951 by Collins for the Festival of Britain office). She wrote and illustrated her own books as well, on subjects ranging from the Isle of Wight to English furniture to the cultural customs and artefacts surrounding death. She died on 28 August 1978. 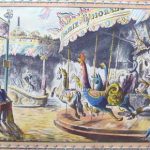 Printed by the Baynard Press, Published by School Prints ltd.