Austin Cole is an artist working in a traditional medium that of the etcher and printmaker. The techniques he uses have changed little since the days of Rembrandt, Goya and Toulouse Lautrec. His etchings of New York are created on metal plates (mostly zinc) using a hard ground and an etching needle to draw the design as Rembrandt would have done. Then to add the tone he uses an aquatint in just the same way that Goya would have used to create his images. His lithographs are created on stone with litho crayons and touché just as they would have been done a hundred years ago when Lautrec and Bonnard created their lithographs.

His influences are many from the artists mentioned above to the work of modern artists/printmakers such as Christopher Le Brun, Paula Rego, Celia Paul, David Hockney as well as many others though he works in a traditional medium, he is resolutely a contemporary artist working in the now. Just as Rembrandt would have drawn the landscapes and cityscapes of his day, Cole is fascinated by the architecture and urban landscapes of the modern city. How the buildings of the city show the effects of pollution, of the weather and how the architecture has been adapted over the years. The brownstone buildings of Manhattan with the fire escapes bolted onto the brickwork or the neon of modern advertising hoarding on the side of a Victorian Building. 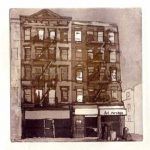 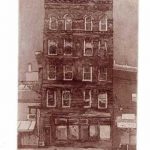 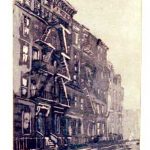 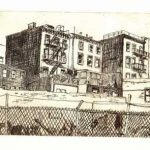 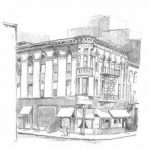 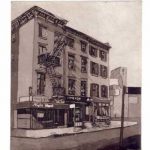