Augustus Edwin John was one of the greatest British draughtsmen well-known for his firm yet supple line. John’s activity as an etcher belongs to the Liverpool period and the majority of them were executed between 1901 and 1910. He took up etching at the suggestion of a friend and was immensely enthusiastic towards the medium. His earliest examples from 1901 were self-portrait studies and several portraits of his wife Ida. His technique was loosely modelled on that of Rembrandt and many were keen to point out the similarity. Much of their value lies in the fact that many of his subjects were highly elusive and shy, often tramps, gypsies, and coster-girls, giving the air of being rather reluctant sitters.

Four exquisite little compositions by Augustus John from 1906, prepared for the first exhibition of John’s etchings held in May 1906 at the Chenil Gallery, London. All printed on white paper, with full margins and deckled edges, bearing notes of the titles, numbers and publisher’s number to the lower margins, in fresh condition, within gilt frames. 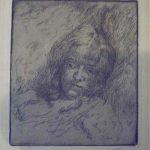 Etching, signed ‘John f.’ in the plate, and in pencil below the platemark, numbered 22/25 in violet pencil, with title and catalogue reference numbers in pencil at the lower edge of the sheet

This captivating etching of Quincy from 1906, shows a young girl, facing the viewer but with a shy gaze and averted eyes. Pre-war etchings by John are highly sought-after and this early example dates from 1906. This example numbered 22/25 was sold in the Augustus John Studio sale in 1962, where the examples retained by the artist were put on sale and presumably it was from these that Campbell Dodgson had worked when he produced the catalogue of John’s etchings. This etching is one of a number of female heads executed during the same period, full of poise and character. This single study of a young girl’s head shows a perplexed, shy and rather contemplative sitter. 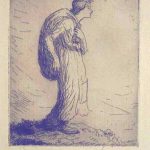 Girl with a sack 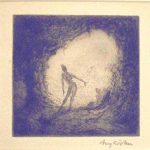 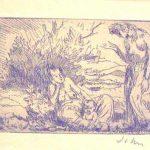 signed by the artist in pencil and numbered 25/25