British artistAnthony Gross was born on 19th March 1905 in Dulwich, London, the son of Alexander Gross, the map publisher. In 1923 he studied at the Slade and took evening classes in etching at the Central School of Arts and Crafts under W.P. Robins. He then studied in Paris and Madrid and travelled extensively in Europe, eventually settling in France in 1926. He illustrated a variety of books there including Cocteau’s Les Enfants Terribles for the Franch Bibliophile society Les Cent Unes. He returned to England at the beginning of World War II and was appointed official war artist between 1941 and 1946. He always worked from life and all his work has an immediacy and tension resulting form his “on the spot” approach.

In 1946 he was elected RA and taught at the Central School (1948-1954), as well as teaching etching and engraving at the Slade. In 1955 he purchased a house at Le Boulvé in France and often went there to paint. Gross was primarily a painter and an etcher and, like Stanley William Hayter whom he knew, was a master of the technique. Although prolific, his etchings are increasingly difficult to find.

All etchings in fine condition with full margins, numbered and signed by the artist in pencil. 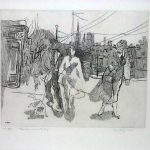 additionally signed in the plate.

This particular subject shows a group of pedestrians walking with their dog near King’s Cross, depicting a grainy cityscape so typical of the artist’s work. The print was made as a gift for the Printmaker’s Council, London and published by them in aid of PMC funds.