Anne Redpath (1895–1965) was a Scottish artist whose brightly-coloured domestic still-lives are among her best-known works. Her father was a tweed designer in the Scottish Borders and she attended Edinburgh College of Art from 1913. Post-graduate study led to a scholarship which allowed her to travel on the Continent in 1919, visiting Bruges, Paris, Florence and Siena. The following year she married the architect James Michie and they went to live in Pas-de-Calais where her first two sons were born. In 1924 they moved to the South of France, and in 1928 had a third son.

Redpath was president of the Scottish Society of Women Artists from 1944 to 1947. The Royal Scottish Academy admitted her as an associate in 1947, and in 1952 she became the first woman Academician. In 1955 she was made an OBE. Redpath is perhaps best-known for her still-lives where familiar household objects are rendered as two-dimensional designs. Her works are represented in many public collections in the UK and overseas. 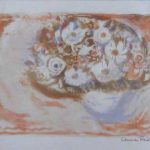