Angela Harding is a printmaker and painter based in Rutland. Her work is a reflection of her keen observation of the countryside and its’ inhabitants that surround her rural studio. In her paintings, she places delicately painted birds, flowers and pottery on solid, carefully selected blocks of colour that have a rather soothing, comforting effect on the viewer.

‘The imagery I use comes from my interest in day-to-day surroundings and happenings.   The work often has an allegorical aspect that has strong reference to British painting of the 30,s, 40’s and 50’s. The work of artists such as Eric Ravilious, David Jones, Winifred Nicholson as well as contemporary artists such as Mary Fedden and the Scottish colourists are a constant inspiration as well as the views of the beautiful Rutland countryside from my studio’. 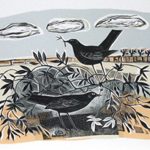