Alyson Stoneman/Hunter is a New Zealand-born photographer and print maker, resident in London. She studied at Auckland University and later Chelsea College of Art and the Royal College of Art. She married the master printer Hugh Stoneman and was a director of Islington Studios and Islington Graphics Gallery. During the 1980s, she travelled and lectured on print making, with Adrian Frost, in America, Australia and New Zealand. She was Master Printer at the New York Printmaking Workshop, and, in 1981 and 1983, University of Davis, California, Visiting Professor.

In The early 1970s, she started making prints with an unusual technique that combined etching and photography, whereby a printing plate is created from a photograph and the plate worked on to alter the contrast, making use of the K.P.R. (Kodak Photo Resist) chemical: this is no longer available because of its toxicity. Work by her is held in the Museum of London and Government Art Collections. From 1990, she moved away from printing into photography. Her portraits of photographers, Dan Farson and Harry Diamond, are in the collection of the National Portrait Gallery. 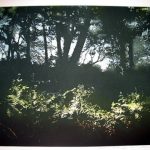 Etching and aquatint in colours on wove paper

signed, titled, dated and numbered from the editon of 200 by the artist in pencil