Allen Jones was born in Southampton in 1937 of Welsh parents. Between 1955 and 1959 he studied painting and lithography at Hornsey College of Art, London. It was during this time that he travelled to Paris and met Delaunay. He entered the Royal College of Art in 1959, where he studied at the same time as Kitaj, Hockney and Caulfield. Between 1961 and 1963 he taught lithography at Croydon College of Art and drawing at Chelsea School of Art in 1964. Jones’ work from the 1960s features a strong psychological aspect, stemming from current dream theory. In 1963 he won the Prix des Jeunes Artistes at the Paris Biennale. He later moved to New York and it was there that he began to experiment with eroticism, having been influenced by commercial fetishist imagery. Jones’ first book Figures was published in 1968; followed by Projects and Waitress in 1971 and 1972. In 1970 Jones designed the costumes and sets for O Calcutta in London as well as other costumes and poster designs, including a mural at Basel Railway Station advertising ‘Fogal’ hosiery. An major exhibition of his prints and paintings was held at the Walker Art Gallery, Liverpool in 1979. 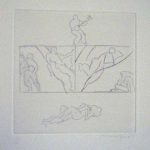 Published by The Royal College of Art in 1987.