Albert Irvin was born in London in 1922. He studied at Northampton School of Art from 1940-1941, before serving as a navigator during WWII. He later studied at Goldsmiths College. His first solo exhibition was held at the 57 Gallery in Edinburgh and he went on to have many one-man shows internationally. A major retrospective of his work from 1960 to 1989 was held at the Serpentine Gallery in London in 1990. He received an Arts Council Major award and was elected a Royal Academician in 1998. His work is characterised by its vibrant colour and energy, as Paul Moorhouse, Tate curator wrote, “even to those familiar with his work , seeing a new painting by Irvin can be an extraordinary experience akin to discovering a young, energetic artist in the first flush of ambition. Given the force of its restless energy, its freshness and the sense it communicates of an artist in love with his chosen activity, it is even more surprising to realise that this is the work of an artist in his late seventies. (Paul Moorhouse. Albert Irvin: Life to Painting.) 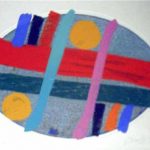 signed, titled, dated ’00 and numbered 1/XX by the artist (one of 20 artist’s proofs aside from the standard edition of 100) the full sheet with margins, top edge deckled