Adrian Berg first studied Medecine and then read English at Cambridge University between 1949 and 1952. He studied at St. Martin’s, Chelsea School of Art and the Royal College of Art. He has exhibited widely since 1964 and a one-man show was held at the Royal Academy in honour of the artist’s 70th birthday in conjunction with a show at the Piccadilly Gallery.

Adrian Berg won Gold medal at the 1973 Florence Biennale and was elected a Royal Academician in 1992. He was appointed an honourary fellow of the Royal College of Art in 1994. In 1987, he was awarded the National Trust’s Foundation for Art award and was commissioned to produce watercolours for the foundation in 1995. Examples of his work are held in numerous public and corporate collections, including the Tate Gallery, the V & A Museum, the Royal College of Art, The British Museum, the British Council and Contemporary Arts Society. Adrian Berg lives and works in East Sussex. 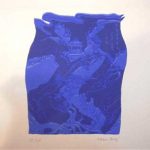 the full sheet with deckled edges in fine condition.