Born in Glasgow, William Robert Hay trained as an artist at the Westminster School of Art in London and spent most of his career in the capital, retaining a studio in Chelsea.  Although perhaps better known as an engraver, Hay was also a highly-skilled draughtsman and painter and exhibited his work at the Royal Academy between 1911 and 1923. He also had works included in exhibitions outside London in various regional and provincial galleries, most notably at the Walker Art Gallery in Liverpool.

This series of deft drawings of the human figure, predominantly children, was made by Hay of people that he encountered near his Chelsea studio. The series forms a penetrating and candid, yet tender, study of Hay’s sitters, each sheet focusing closely on one solitary human figure with little or no hint of a contextualising background or narrative, but done in a way that shows the artist’s great sensitivity and empathy towards his subjects.

A series of very fine life drawings in pencil and charcoal, c. 1910. 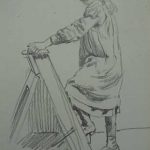