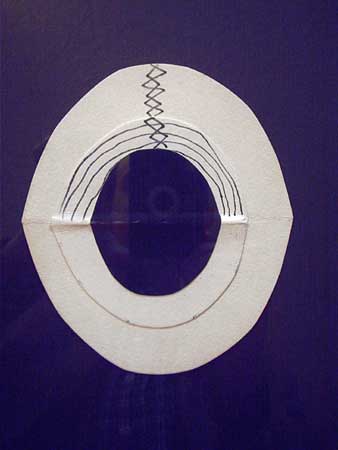 collage c. 1990 with pen and ink on paper and card

three superimposed ovoid shapes, with central fold along the horizontal, mounted on black card with cross hatched additions in pen and ink by the artist
signed on reverse by the artist in black pen, with drawing of sun

This quality of the unfinished’ in Frost’s drawing is never manneristic; it is, rather, a function of a native urgency, of an imperative to discover an image or quickly register a visual idea, or to put down without delay the notation that might catch a fugitive idea, keep it in sight. Many drawings and small collages of this sort are immediate and spontaneous improvisations on a theme presently being explored on a larger scale in a painting; sometimes they may be the first intimations of a new imagery soon to find deployment in larger and more complex works (Mel Gooding, Terry Frost: Act & Image. Works on paper through six decades , London & St. Ives, Belgrave Gallery, 2000, p. 10).

Collage is a technique that emerged in Frost’s work in the 1960s and recurred with increased frequency from the 1970s until his death. It was a vital shorthand within his repertoire, opening up new worlds of visual experimentation and spontaneity. Frost’s use of collage extended to both works on canvas and on paper, adding an impromptu and playful dynamic to them. The compositions Bikini from the early 1970s and Moonlight Becomes You from 1978, both playing on the female form, exemplify another quality that collage brings to Frost’s work: that of a wonderful visual humour and whimsy, as well as the artist’s ability to convey complex three-dimensional forms and spatial relationships through the use of two-dimensional accreted elements. The ovoid forms evident in the present collage, and the use of reductive black and white, are another important aspect of Frost’s works from the 1980s and 1990s. In Untitled from the early 1980s, executed in ink and acrylic on paper, these ovoid forms are interlinked like a paper chain, forming vectors where the flattened rings intersect. A strong visual poetry and a heightened compositional dexterity are powerfully evident in such works and the deployment of collage is one of the keys to their success.