From the thousands who go to art school at whatever epoch and whatever is taught, only a ten will emerge with an original voice (Eduardo Paolozzi on Russell Sidney Reeve, 1992)

Russell Sidney Reeve was born in Norwich in 1895. He was encouraged to paint from an early age and attended the Norwich School of Art in 1908, later training to become an architect in the Norwich City Engineer’s Department from 1908-1914.

During the First World War whilst a Lieutenant with the Royal Engineers in France, his drawings came to the attention of William Rothenstein, who was later Principal of the Royal College of Art, and Eric Kennington. Upon his return to England, both artists put him forward for a place at the Slade School of Art. He attended the Slade from 1919 to 1922. Under the guidance of Henry Tonks and Philip Wilson Steer, Russell developed into a confident draughtsman and was awarded the first prize for figure drawing, the Orpen Bursary and the Robert Ross Scholarship.

Although Reeve made his home in London, much of his family lived in Suffolk and it was there that he drew the animals, landscapes and people that came to characterise his work. His later oeuvre became more European in theme and the people and landscapes of the Mediterranean featured heavily.

The artist exhibited regularly during his lifetime at the Royal Academy, The Royal Society of British Artist and at the New English Art Club. The Tate Gallery, the V & A Museum, the Imperial War Museum, as well as at the City of Bradford and City of Sheffield Museums and the Government Art Collections have all acquired his work. 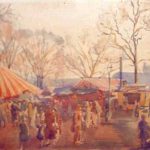 titled with estate stamp to reverse