Roy Turner Durrant was Suffolk-born and East-Anglian based. He was an artist of a typically English sort, and very much of his time.

He studied at Camberwell in the years immediately after the Second World War, and emerged as one of that second generation of Neo-Romantic painters, post Sutherland and Piper with artists such as Craxton, Vaughan, Pasmore, Minton and Alan Reynolds as his contemporaries. During the later 1950s he would move in his work from an increasingly stylised representation of the landcape towards abstraction.

Works by him are held in the Tate Gallery, London, London Museum, Cambridge University and the Imperial War Museum. 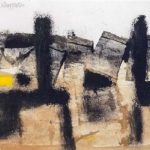 titled and inscribed ‘d56’ and ‘4CR96’ watercolour, gouache and black ink on paper 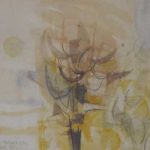