Roland Vivian Pitchforth was born in Wakefield, Yorkshire. He studied at the Wakefield School of Art from 1912-1914, Leeds College of Art from 1914-1915 and 1919-1920 during which his studies were interrupted by the Great War. Between 1920 and 1925 he studied at Royal College of Art. His first one-man exhibition was held at the London Artists’ Association in 1928. In 1929 Pitchforth exhbited with LG. and then at the RA from 1941. He was elected RA in 1953. His work is held in the Tate Gallery, Victoria & Albert Museum and many provincial galleries in the Uk and overseas. 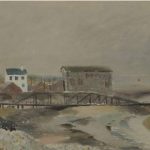 Watercolour on paper with visible colour notes in pencil (painted over) 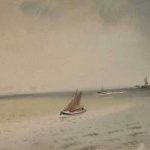 Known as “London’s Second River”, the navigable section of the Medway flows for almost 50 miles through Tunbridge and Maidstone.

The area was once a source of inspiration for novelist Charles Dickens who at various times in his life lived nearby.