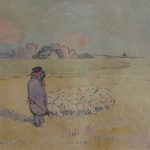 Shepherd-Boy tending to his Flock

signed with the monogram RPB

watercolour and pen & ink on paper

This very fine watercolour depicting a harmonious bucolic scene was probably executed circa 1903, when Bevan is known to have used the particularly cursive form of his monogram for some of his works on paper (cf. plate 20: The Passing Carriage, in R.A. Bevan, Robert Bevan 1865-1925. A memoir by his son, London, 1965, for another identical example of the monogram). This work depicts a well-wrapped-up shepherd boy, wearing a peaked cap and with a long switch in his hand, tending a neat flock of grazing sheep. In the distance behind him is a stone barn sheltered by trees and, farther away still on the horizon, the crossed arms of a windmill can be seen. The beautifully modulated tones are chiefly cool blues and greens and slightly warmer yellows and mauves, conjuring perhaps the late-afternoon light of early spring. The palette and its deployment across the surface of the composition are typical for Bevan’s work at this time.

Bevan’s wife’s family were Polish and the artist visited that country a number of times during the first decade of the twentieth century. R.A. Bevan writes: “Bevan’s most important work in the first years of his marriage certainly stems from Poland, where he worked in 1899, 1901, 1903, and 1904. During these years Bevan developed a strong feeling for Poland and the Poles; he found there some of the qualities he had found and liked so much in Brittany. But the life in Poland which Bevan shared with his wife’s family was a country life of a kind he had not previously known intimately. My mother’s father and her brothers-in-law […] bred horses and cattle for themselves and for sale; they had their own water-mills, their own small forests and sawmills. They ate their own meat, poultry, and game…” (R.A. Bevan, op. cit., p. 12).

It is likely, then, that Shepherd-Boy tending to his Flock depicts a young Polish shepherd on his in-laws’ estates, wrapped up in a thick coat against the eastern evening chill.