Born in Leicester, Austin first attended the Leicester School of Art (1909-13), from which he then won a scholarship to the RCA in 1914. It was here that he undertook the serious study of life drawing, which would become a passion he would continue throughout his artistic career. His studies were interrupted by the First World War, during which he served in the trenches as a gunner with the Royal Artillery, later capturing his experiences in series of drawings. In 1919 he was able to return to the Royal College, and he now learnt the art of etching under Sir Frank Short. In 1922 Austin won a scholarship in engraving at the British School in Rome, and was able to travel through Italy and Germany, inspired by the landscape and above all by the works of the Old Masters. He became well-known during this decade as an etcher, but also became increasingly interested in engraving, and returned to Britain in 1926 to teach engraving at the RCA, later becoming Professor of Graphic Design there in 1948.

He was elected Royal Academician in 1949. It was in 1929 that he first visited Norfolk, a country whose landscapes were to inspire him for the rest of his life, and which he made his country retreat and studio in 1935 when he bought the Old Chapel at Burnham Overy Staithe. It was here that he painted and drew many of his best-loved works, landscapes, and intimate portraits of his wife and children. His family have recalled how he used to venture out into the countryside in the depths of the night in order to be ready to paint between the hours of 5 and 7 in the morning, when he felt the light to be at its purest.

During WW2 Austin worked as an Official War Artist with the RCA at Ambleside on numerous commissions; drawings from the War show such subjects as nurses, fighter pilots, and the Woolwich Arsenal.

The Imperial War Museum houses thirty-four of these works. His work is represented in the collections of the Tate, the V & A, the Fitzwilliam Museum, the Ashmolean, and the British Museum. An important retrospective was held at the Ashmolean in 1980.

Provenance: all works, the artist’s studio. 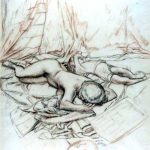 additionally stamped with the artist’s monogram 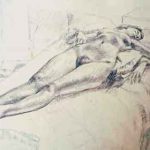 stamped with the artist’s studio stamp