English sculptor, photographer and painter. Within a year of his departure from St Martin’s School of Art, London,Richard  Long was closely associated with the emergence of a new art form, Land art. Long made his international reputation during the 1970s with sculptures made as the result of epic walks, sometimes lasting many days, to remote parts of the world. Guided by a great respect for nature and by the formal structure of basic shapes, especially circles, he never allowed facile exotic connotations to intrude into his work. Long distinguished himself from American land artists by the lightness of his interventions on the ground; he saw this both as an ethical principle, in refusing to despoil or exploit the landscape, and as an aesthetic one. With Long’s works, the spectator, is confronted with the idea of the walk, not with the artist’s experience itself, but with the indirect evidence of it.

pencil drawings on one sheet for the layout of Richard Long photographs published in the Poetry Journal “Collection Seven” in 1970.

with minor crease at lower section of page. The layout design is divided into three sections with annotations by the artist to the publisher. An original layout design by the renowned British land artist dating from 1970. 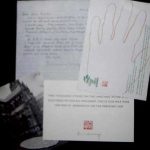 Collection of signed items relating to the Artist

one page ALS from Richard Long, in pencil on lined paper, folio, dated ‘Oct 15 1999’ listing various people who have influenced his life and work “my parents, Van Gogh, Beethoven…”, signed by the artist and with his stamp; 3 artist’s cards, the first two signed in pencil by the artist, the second dated 2001, the third with an outline sketch of the artist’s hand and stamp to the reverse. An interesting collection of 4 printed items relating to Britain’s foremost land artist, Richard Long.