Ray Barry was born in 1931 and studied at Falmouth College of Art. He is a prominent member of the St Ives Society of Artists, and has been both working colleague and friend to many other St Ives artists, including Terry Frost.

“Although my work is generally non-referential, harbour or landscape motifs often find their way into the structure, forming mosaics, influenced by stained glass, with rich elements of colour and texture. On my ‘journey’, in search of perception and responsiveness to life, I use changing techniques such as translucency, over-painting and drawing, charcoal, rubbing, scratching, scumbling and occasionally collage. The result may not always please the viewer, but evidence of ‘the search’ is there.”

Barry has a major exhibition opening at the Mariners’ Gallery in St Ives in April 2007. He has exhibited widely both in Cornwall and in London. 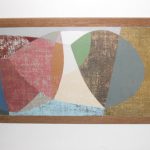 Oil on canvas, laid down to board,

Signed, titled and dated 2001 on the reverse