Peter Foster was born in 1919 and educated at Eton and Trinity Hall College, Cambridge. He was encouraged to paint at an early age and was taught by Robin Darwin. After the war he qualified as an architect and was the Surveyor of the Fabric of Westminster Abbey from 1973-1988. He has exhibited with the Cambridge Drawing Society, The Norwich Art Circle, the Huntingdon Art Group and the Royal Academy. In 1989 the Judd Street Gallery held a major solo exhibition of paintings executed over a fifty year period. In 2000 a book of his work was published. Alan Powers. Holiday painter: Watercolours 1935-1998. Peter Foster. 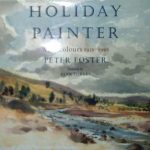