This delicate and understated oil painting takes as its subject one of the most famous views of St Ives, looking out from Man’s Head over Porthmeor beach to the Island and Godrevy lighthouse. The view has been painted so many times before, probably most famously by Christopher Wood. But Peter Davies’ painting is fresh and unburdened by its associations; he makes the vista all his own, whilst subtly alluding to the ‘naïve’ styles associated with the origins of modern art in the artists’ colony.

Peter Davies is best known as a writer on modern British art; he contributes regularly to The Independent and is the author of many monographs on artists, as well as the important reappraisal St Ives Revisited. He is also an accomplished, perfectionist painter, whose works are scarce and much sought after.

Reference: David Buckman, Dictionary of Artists in Britain since 1945, p. 333. 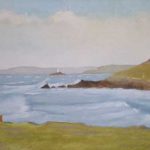 signed, titled and dated with exhibition history to reverse