Patrick Jobson was born in Essex and came from a long line of artists. He was greatly influenced by the work of Frank Brangwyn, who he came to know and became a marine and landscape painter. He was a founder member of the Society of Marine Artists and a founder member of the Wapping Group. His work has been widely exhibited in Britain and he also illustrated a number of books on the sea for children. 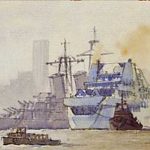 pencil, pen and ink and watercolour on card initialled by the artist