Norman Adams studied at Harrow School of Art between 1940 and 1946 and subsequently at the Royal College of Art from 1948 to 1951 where he was awarded the Bronze Medal for Painting. He began teaching in the 1950s when he taught part-time at St Alban’s Art School later becoming Head of Painting at Manchester College of Art from 1962 to 1970, and later visiting tutor at Leeds University from 1973 to 1976 and Professor of Painting at the University of Newcastle-upon-Tyne from 1981 to 1986. He was elected Keeper of the Royal Academy in 1986 and was appointed the Academy’s Professor of Painting Emeritus in 1995.

Adams’s first solo exhibition was held in 1952 at Gimpel Fils in London and biennial one-man shows were subsequently held from 1953 at Roland, Browse and Delbanco. In 1953 he designed the stage set and costumes for ‘A Mirror of Witches’ produced by the Royal Ballet at Covent Garden, and again for the Sadler’s Wells production of Saudades in 1955.

A number of important commissions have played a large part in Adams’s career, his first being the painting of a mural for Broad Lane Comprehensive School, Coventry in 1954. In 1967 he was commissioned by the Oxford University Press to illustrate parts of the Old Testament. He went on to paint murals for St Anselm’s Church, Kennington, London in 1971 and to make 14 ceramic panels of the Stations of the Cross for the Roman Catholic Church at Coffee Hall in Milton Keynes in 1975. More recently, in 1994 Adams received another commission for the Fourteen Stations of the Cross,
this time in oils, for St Mary’s Church, Mulberry Street, Manchester. These were installed in November 1995 having first been exhibited in the Sackler Galleries at the Royal Academy.

A retrospective of Adams’s work was held in the Diploma Galleries at the Royal Academy in 1988. 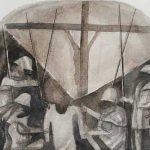 The present work is the finished watercolour study for the ceramic tile ‘Jesus is stripped of his garments’ for the 1975 ceramic Stations of the Cross for The Church of Our Lady of Lourdes, Milton Keynes.