Michael Strang studied under David Poole, Anthony Eyton and others at Wimbledon and Camberwell Schools. He has painted primarily in Cornwall since the 1970s, and had a show of 50 oils at Tate St Ives in 1995. He often paints en plein air, and there is a terrific momentum to his outdoor oils. His constant delight in colour and light is always apparent in his work; at times his vigour leads him into almost abstract renderings of the landscape. Increasingly he experiments with heavy forms of impasto, creating extraordinary textures that at times practically become three-dimensional artworks. He has exhibited at the Royal Academy Summer Exhibition, and his work is in numerous public collections worldwide and at home. 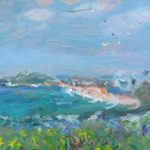 signed, signed and inscribed on reverse

Painted for the 1995 Tate St. Ives “Porthmeor Beach: A Century of Images” exhibition. 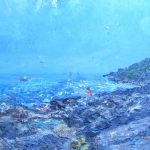 signed, inscribed and dated to reverse