Michael Canney was born in Falmouth; his mother was an amateur painter. He rapidly decided that he would be a painter too, and received training both from W. Lyons-Wilson, a topographical watercolourist, at his school, and then studied under Leonard Fuller in St Ives, and Arthur Hambly in Redruth. After visits to the St Ives artists’ studios in the early 1940s Canney met with Barbara Hepworth, Ben Nicholson and Naum Gabo; but his early paintings were greatly influenced above all by the impressionists and the Cubists: Cezanne was his artistic hero.

During the War Canney served in Italy, and became absorbed by the art he encountered there; an important contemporary meeting came when he met de Chirico at art classes in Florence. Back home, Canney completed his art training at Goldsmith’s College between 1947 and 1951. The influence of Cezanne persisted, but gradually Canney was moving further towards pure abstraction.

Having taught for a short while in London, Canney moved back to Cornwall in the mid-fifties to become curator of the Newlyn Art Gallery in 1956. He now brought to the region an important internationalism, and was integral to organising the visit of Rothko in 1958. He began publishing articles on the art scene, displaying a journalistic and intellectual interest in art that would persist alongside his creative impulses. Canney’s work moved from cubist and constructivist sensibilities to a greater degree of gestural freedom during these years; then in the 1960s he turned more sharply to hard-edged, geometric abstraction. After a period in California, during the mid-sixties Canney was appointed to the teaching staff of the West of England College of Art in Bristol, alongside his friend Paul Feiler. He taught there until retiring to Tuscany in 1983. 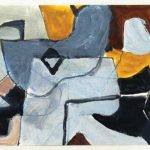 estate stamped to reverse of frame

Provenance: Estate of the artist

the full sheet printed to the edges

Provenance: Estate of the artist