Matt Bruce was born in Shanghai of British parents. He was educated at Dollar Academy, Scotland and later trained at Edinburgh College of Art where he was awarded postgraduate and travelling awards. He was a painter in all media, impressionist in style. Frequent subjects include landscapes and marines. He was a lecturer and wrote a number of articles for art journals. A number of awards for painting have now been established in his name.

His work was exhibited at a number of British and Overseas galleries including the Royal Academy and the Royal Instiutute of Painters in Watercolours in London.

His work was published by the Hamlyn Group and Harlands of Hull. He was a member of the Royal Instiutute of Painters in Watercolours and the Pastel Society. 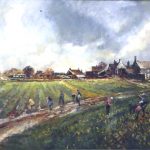