Mary Ford has spent most of her life in Cornwall, before and after studying at the Royal Academy under William Scott, who would become the major influence in her artistic career. She aligns herself too with Alfred Wallis and John Wells, producing powerful collages that reside somewhere in between intuitive arrangement and constructivist sophistication.

Her work is held in the Tate Collection. 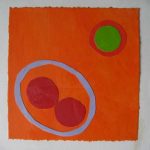