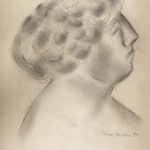 charcoal on paper, signed and dated 1934

This drawing is a particularly fine example of Gertler’s late style, illustrating both his mastery of drawing and the ways in which such drawing corresponded with his larger work in oils.

After his voluptuous nudes of the 1920s Gertler’s female portraits were dramatically pared down and intensified in the 1930s, achieving a new sense of solid, sculptural form. Drawings such as this have been compared with those of Henry Moore (a friend of Gertler’s at the time), and Barbara Hepworth. However, the influence of post-impressionism and cubism were always foremost in Gertler’s mature work, and the neo-classicism here recalls Picasso and Juan Gris’s monolithic female figures of the early 1920s. Gertler’s model at this time was Jean Kemp, a schoolfriend of his former landlady’s daughter; she recalled sitting for more than a dozen studies, from full-length to head studies, of which the present work is one. She was usually depicted in profile; the chiselled features and large eyes are present in all. Gertler would begin his larger oil paintings with similar drawings in charcoal which he would then over-paint. The head of the full-length female in ‘Musical Bather’ (1934), for example, corresponds almost directly with this drawing.