Maggi Hambling, who was born on October 23, 1945 in Sudbury in Surrey, is a sculptor and painter of portraits and figures in oils and watercolours. After studying with Cedric Morris at the Ipswich School of Art in East Anglia from 1964-67, she went on to Camberwell School of Art (1967-69) and the Slade School of Art in London. She is probably best known for her acclaimed statue, A Conversation with Oscar Wilde, which was installed in Adelaide Street, near Trafalgar Square in London in 1998.

Her first series of paintings date from 1973, and were portraits from memory of isolated drinkers in pubs, all of which sold in her first exhibition. Her breakthrough work was a series of studies focusing on one person, Frances Rose, her elderly Battersea neighbour. This series is also significant because it was the first time Hambling used images of someone dying or dead, a subject which she has returned to in such works as her portrait of Derek Jarman, which was painted from memory three weeks after his death in 1994. One of Hambling’s paintings of Frances Rose caused a sensation at Tate Britain when it was placed beside Hogarth’s portrait of the Bishop of Winchester.

From 1980-1981 she was the first Artist in Residence at the National Gallery in London, where her portraits, such as one of the comedian Max Wall, have proved very popular and her portrait of a warder is hung on permanent display. She also has six works on display at the National Portrait Gallery. Her work is expressionistic, imbued with an immediacy she achieves by building up her subject through swirls of colour. Her vivid observations in paintings and charcoal sketches encapsulate her direct and committed engagement with her subject, interpreted in dynamic and bravura impressions.

In the mid 1980s she turned to landscape painting, depicting scenes from her native Suffolk, where her studies of dawn in the Orwell Estuary recall the luminous visions of 19th Century English masters JMW Turner and John Constable. In works from the early 1990s these dreamlike compositions were increasingly shot through with a violent symbolism, where Hambling chose not only to work from life, but also drew on memory and her subconscious imagination to escape the limits of documentary realism.

Hambling had an intimate relationship with the Soho character Henrietta Moraes during the last year of her life which resulted in a series of celebrated portraits. Moraes, who Hambling describes as her ‘muse’, was one of many larger-than-life characters she has tried to capture on canvas and in bronze: from the aforementioned Max Wall to Stephen Fry, George Melly, AJP Taylor, Dorothy Hodgkin and Michael Jackson, her portrait of whom caused a scandal in 1994 when she submitted it to the Royal Academy together with a note arguing that he was innocent of child abuse charges. What distinguishes her from other artists is the intensity of her struggle to capture the immediacy of her sitters through the emotional landscape of their face. Her portrait of Stephen Fry in the National Portrait Gallery is an example of how Hambling portrays the warring emotions flitting across his face, which Hambling describes as having ‘all the wit and optimism in his right eye, and the opposite, the sense of tragedy, in his left’.

Maggi Hambling’s major exhibitions include Drawings and Paintings on View at the National Gallery, London in 1981, Pictures of Max Wall at National Portrait Gallery (1983), The Serpentine Gallery (1987), An Eye Through a Decade at the Yale Centre for British Art, Newhaven, Connecticut (1991), 1995 exhibitions at the Royal Academy of Scotland, Edinburgh, and Royal Academy, London, portraits of Henrietta Moraes at the Marlborough Fine Art Gallery, London and Father at the Morley Gallery, London (both 2001).

Maggi Hambling won the Jerwood Painting Prize, jointly with Patrick Caulfield, in 1995 and was given an OBE for her services to painting in the same year. 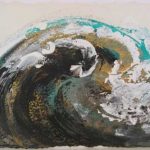 signed, titled and dated on reverse