Keith Vaughan was born in Sussex. He was self-taught as an artist and from 1931 to 1938 worked for the advertising agency Lintas, only painting in his spare time. During the war his work was bought by the War Arts Advisory Committee and he met, and was greatly influenced by, Graham Sutherland, John Minton, John Craxton and Robert Colquhoun. His first solo show was at the Reid and Lefevre Gallery in 1944 and he continued to exhibit there until 1952. Retrospective exhibitions of his work include the Whitechapel in 1962, the University of York in 1970. He was represented in many group exhibitions and his works are held in many public collections, including the Tate Gallery. He taught at Camberwell 1946-8, the Central School 1948-1957, and the Slade from 1959. In 1959 he was Resident Painter at the State University of Iowa. He served on the Arts Council Advisory Panel, became an Honorary Fellow of the RAC in 1964 and was made a CBE in 1965. Commissioned work included murals for the Festival of Britain, 1951, and a series of lithographs for Rimbaud’s ‘Une Saison en Enfer’. He is well-known for his male nudes and landscapes. Early influences were those of Cézanne and the English neo-romantics. Later work achieved an integration of figurative subject and liberated colour and form, reflecting his admiration for de Stael and Matisse. 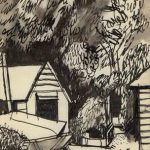 pen and ink and wash on paper, signed 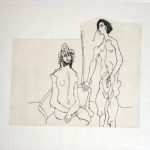 Pen and ink on paper studio stamp to the reverse