Julius Olsson was one of the foremost British marine painters of the late nineteenth and early twentieth centuries, and a luminary in the early years of the St Ives art colony. Born in London to a Swedish father and English mother, Olsson worked first for a London bank, before finding his true calling as a painter. He travelled widely in Europe in his early years, settling in St Ives in 1890. He was quick to achieve success, and from that year on exhibited at the Royal Academy. He would later win two gold medals at the Paris Salon. Olsson founded the St Ives School of Landscape and Marine Painting together with Louis Grier in the Porthmeor Studios, which had been recently converted from net lofts. He remained in the town until 1911, when he moved back to London, but retained strong connections with Cornwall thereafter.

Olsson was largely self-taught, but his travels in Europe had put him in touch with the work of the Impressionists, which would remain a major influence. Much of the groundwork for his paintings was done en plein air, but with the paintings being completed in the studio. He was greatly interested in the romance and folklore of West Cornwall, and began to incorporate mythical figures such as mermaids in his work of the mid-1890s; while mythological subjects had disappeared from his work by the turn of the century, the magical sense of colour would remain.

Though best known as an oil painter, these rare watercolours show Olsson to be a master too of the lighter medium, and the same qualities for which his oils are prized are here in evidence: luxuriant colour, a sense of harmony and proportion, and a delicate balance between realism and impressionism. Sunrise and sunset were favourite subjects, allowing Olsson the fullest contrasts of light; he has been compared with Whistler (who visited St Ives in the 1880s) in his pursuit of such total qualities of light. A contemporary reviewer spoke of Olsson’s ‘effects of luxurious softness and warmth’, and these are everywhere here in evidence. 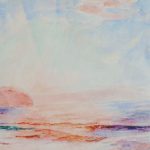 This rare watercolour dates from before Olsson moved back to London in 1911. 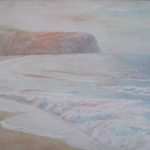 Provenance: estate of the artist