John Stanton Ward trained at Hereford School of Art and then at the RCA from 1936-39 and 1946-47 – in the intervening WW2 years he served in the Royal Engineers. In the late 40s and early 50s Ward worked for Vogue, producing fashion sketches and interior designs. He has a great fondness for antiques, and felt particularly attached to the illustrative artists of the 1860s, at times aligning his own work with theirs. Ward was famed for his portraits as well as for his architectural drawings, both of which ideally suit his elegant yet enchanting veracity. He also illustrated Laurie Lee’s classic Cider With Rosie, 1959. There is always a captivating stillness in his finest work which is present in this charming pencil drawing of a young girl quietly reading, captured in a tranquil and composed mood.

As an illustrator Ward is famous for remarking that ‘an illustration should be a diagram that makes a point’. In keeping with such an expression of simplicity, Ward’s book illustrations give the impression of being spontaneous sketches, drawn in pencil or pen and ink with a fluent, controlled hand. 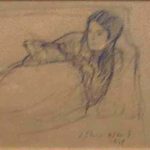 Girl reading on a sofa

Pencil on paper signed by the artist and dated 1975 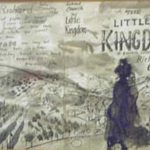 pen and ink and watercolour on paper two variants, with lettering by the artist Inscribed: ‘Easter Sunday, 1966, Dear Richard, Some wall paper for your new home! I came across these attempts at jackets and wondered whether you would like to have them. Please one day let us do another book together. Saturday lunch was such fun. Much love Alison & John.” 1964

The designs were not used on the book, a copy of the first edition, 1964 with illustrations and the final dust-jacket designed by John Ward is included with the drawings.