John Reay was born in London. He studied Brighton Art School (1969) and Norwich Art School (1970). He settled in Lowestoft (1974) to work on location on the Suffolk and Norfolk Coast. In thirty years of studying the coastal environment the human figure has become a major part of his work. His work held in many private collections in USA, Germany, Middle East, Australia and the UK and in Doncaster Museum and Art Gallery. 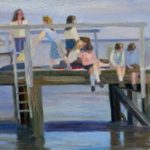 Children Playing on a Jetty