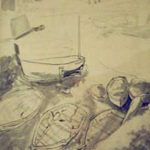 John Minton made frequent visits to Cornwall to visit his poet friends, W.S. Graham and Nessie Dunsmuir. In the summer of 1944 he spent six weeks with them at Germoe in their two gypsy caravans. He returned to Cornwall on numerous occasions, once bringing with him his close London companions Robert Colquhoun and Robert MacBryde, a later time bringing Keith Vaughan. In March 1948 he visited Nessie Dunsmuir at Mevagissey where she had moved into a cottage with Graham in 1947. Graham and Dunsmuir had recently agreed to separate for a time, and Graham had travelled to the States to give a series of lectures on British Literature at New York University. Minton enjoyed a lively correspondence with Graham, in which painting and poetry were the two most common topics. Though Graham was away during Minton’s Mevagissey stay, he had recently embarked upon ‘The Nightfishing’, his first great poem, which he had begun to describe to Minton. Graham had been inspired by fishing trips he had joined with working crews during his first months in the harbour town. ‘The Nightfishing’, whilst far more than the ostensible description of a night’s fishing expedition in its allegorical dimensions, owes a good deal to those experiences. Graham describes the return to the harbour in terms of respite and regeneration:

‘We came in, riding steady in the bay water A sailing pillar of gulls, past the cockle strand. And springing teal came out off the long sand. We Moved under the soaring land sheathed in fair water In that time’s morning grace. I uttered that place And left each word I was. The quay-heads lift up To pas us in. These sea-worked measures end now. And this element Ends as we move off from its formal instant. Now he who takes my place continually anew Speaks me thoroughly perished into another. And the quay opened its arms. I heard the sea Close on him gently swinging on oiled hinges. Moored here, we cut the motor quiet.’ (‘The Nightfishing’, 3)

Minton in turn was inspired by Mevagissey, and produced a notable oil painting there, which is at present lost. This drawing may well relate to that oil, and is extremely scarce: very few of Minton’s Cornish paintings and studies survive. Minton described the impact the Cornish coast made upon him in a letter of 1944:

‘God how I love the land to stand and see it move in intricate perspectives to the heathaze of the gentle skyline, and there always the violence, the clear sharp violence of things living and growing and of being young walking the earth … I love the sea, treacherous, cold, impersonal, caught by the moon and shifted in the giant tides, the waves breaking forever with the subtle cruelty of terrible indifference.’ (letter from John Minton to Judith Hollman, n.d. [Summer, 1944] quoted in Spalding p.76).

Though Minton stressed the violence of the landscapes, and of the world more generally, and though Graham’s poetry portrays the sea in a similar vein, Minton’s art seeks refuge from these turbulent forces, and captures moments of fleeting tranquillity, as in the present drawing of moored boats at ease in the peaceful low-tide harbour.