Perhaps the best known of the representational St Ives Painters, John Anthony Park arrived in St Ives in 1899 having spent his youth working in the cotton mills of his native Lancashire, and within six years he was exhibiting at the Royal Academy. Park was encouraged in his painting by Julius Olsson, one of the foremost of the nineteenth-century artists who colonised St Ives, who founded a School of Landscape and Marine Painting overlooking Porthmeor Beach. Under Olsson’s guidance Park left to train in Paris in 1905, where he studied at the Atelier Colarossi, and where he was introduced to impressionism. Returning to St Ives in 1923 Park rapidly established himself as the foremost naturalist painter of the fishing port, painting idyllic views of the old town and harbour that are so familiar to us today. He continued to exhibit at the Royal Academy until 1949, was elected member of the Royal Society of Oil Painters in 1923, helped to found the St Ives Society of Artists in 1927, and won gold medal at the Paris Salon in 1934. His work is held in many national institutions including the Tate and Manchester City Art Gallery. 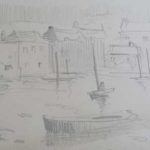 pencil on paper signed by the artist

Park frequently filled sketchbooks with drawings, working confidently in the manner espoused by Olsson. These were often ideas for oil paintings, sometimes set down in charcoal and conté crayon or pencil. These were often quite structured and finished drawings which helped to give his eye the structure of the finished painting and a sense of texture. 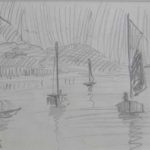 pencil on paper, signed by the artist 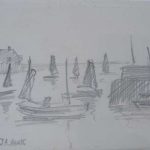 pencil on paper signed by the artist