“The work of James Lloyd I found most interesting and unusual…owing to its individual style, its sincerity of approach and its care in execution. It is the result of perceptive observation of certain everyday things which appeal to the artist, revealed in his own personal way.” ( L.S.Lowry, 1971.)

James Lloyd was born in Cheshire and grew up on his father’s farm. He had some interest in art in his younger days, doing small black and white ink drawings, but it wasn’t something he pursued as he worked in a number of careers, including farm laborer, builder’s laborer, lamp lighter, stoker, bus conductor, and policeman. Lloyd was in his forties when he married his second wife, Nancy, and as she relates, it was after the birth of their first child that he seriously took up painting. “It happened one Christmas; there was no money to buy Christmas cards at Woolworths, so James said he would paint them.”

Lloyd appreciated the works of the English artists Turner and Constable, and studied reproductions in books. Upon very close examination, he realized that the pictures were formed of tiny dots as a result of the printing process. It was this discovery that set him on the path of his pointillist technique.

Many of the subjects Lloyd chose for his compositions were scenes of life in the English countryside.

Sir Herbert Read the poet, scholar, literary and art critic, was the same man who helped Henry Moore, Barbara Hepworth, and Ben Nicholson establish their work. Along with fellow critic John Berger, they bought some of Lloyd’s work, encouraged him to do more, and brought him to the attention of London art dealers.

James Lloyd was eventually introduced to filmmaker Ken Russell. A television documentary was made about his life and work, titled “The Dotty World of James Lloyd”. He was also cast to play the French painter, Douanier Rousseau in another Russell film.

In 1974, James Lloyd died of a heart attack in Skirpenbeck, near York. He was 69 years old.

His painting Cat and Mouse is held at the Tate Gallery. At the time, he was the only living artist to have a painting at the Tate. The Anthony Petullo Collection of Outsider Art in Milwaukee has a number of works by Lloyd. Leeds City Art Gallery, Bowes Museum and Thomas’s College, York hold work. His work was collected by museums as far apart as Caracas, Venezuela, and Zacreb, Yugoslavia. He won the coveted International Best Primitive Painter Award in 1973, with his painting Boy with Horse. 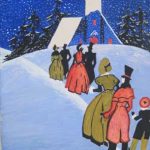 signed and dated 1948 by the artist

an early hand-painted Christmas card from 1948 by James Lloyd 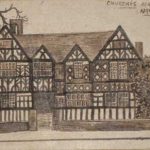 gouache on reverse of postcard

1950, signed long note in pencil to reverse from the artist’s wife, Nancy, presenting ‘one of Jim’s paintings’ 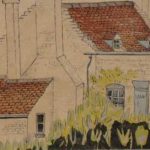 pen, ink and gouache on reverse of postcard 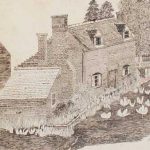 pen and ink on paper signed