Jack Pender was born and bred in Mousehole, the fishing village on the Southern Coast of West Penwith, and lived there for most of his life. His family were fishermen, but his grandfather took up painting on retirement, becoming a formative influence on the young Pender. Pender went on to study at Penzance School of Art, alongside Peter Lanyon, then at the West of England College of Art, Bristol under Paul Feiler, going on to teach at Plymouth Art School in 1950 before returning to Mousehole in 1956. He had numerous solo shows, including at the Arnolfini Gallery, Bristol, and the Newlyn Orien Gallery, and was the subject of three different BBC films in the 1970s. He was included in the major Tate retrospective of 1985, ‘St Ives 1939-75’, and had a retrospective at the Belgrave Gallery, London in 1990. He was the subject of a major retrospective in 2008 at Penlee House Gallery, Penzance.

Pender was a close friend of many of the other artists working in the St Ives area, including Terry Frost and Roger Hilton. Like them, he was interested in synthesising elements of landscape and figuration with abstraction; he wrote of being ‘constantly aware of the interplay of space and solid, shape and colour, and of the relationship of boat to boat, to quay, to sea and to man.’ His love for his harbour town was further reflected when he was appointed chairman of the Mousehole Harbour Authority.

‘Moored Boat’ is a fine demonstration of Pender’s Constructivist bent, taking his typical subject of a boat but reducing the harbour scene to simplified planes of colour and achieving a geometric harmony in the mirroring of curves. This harmony of shape is matched by the chromatic harmony, which suggests a scene bathed in rosy evening light. 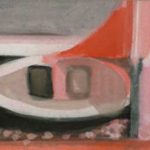