Hubert John Williams was born in 1905 and studied art at the Royal Academy Schools where he received the Landseer Scholarship. He also studied at the St. Martin’s School of Art and the Central School of Arts & Crafts. He Exhibited widely, at the Royal Academy and illustrated a number of books. Examples of his work are held in a number of public collections including Imperial War Museum and Museum of London. 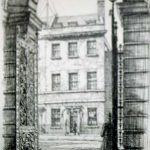 Pen and ink over pencil on board

Signed by the artist, titled in pencil