Born in London, Glyn Warren Philpot was the youngest of four children of John Philpot, a chartered surveyor, and Jessie Carpenter Philpot. His mother died when he was seven and his father married his first wife’s half-sister, Julia. Glyn Philpot was often ill when a boy and missed a lot of schooling.

At the age of fifteen he went to the Lambeth School of Art. At the age of 19 in 1904 he had his painting, The Elevation of the Host, accepted for the Royal Academy Summer Exhibition. At the same age he held his first one-man show. In 1911 Glyn Philpot met the artists Charles Ricketts and Charles Shannon. Through them he met Robert Ross who was to be helpful in obtaining commissions.

In 1913, while serving in the First World War Glyn Philpot met Vivian Forbes (1891-1937) who clung to him for the rest of his life. In 1917 Robert Ross introduced Glyn Philpot to Siegfried Sassoon who was convalescing after being wounded and in France, and Glyn Philpot painted his portrait. He also painted portraits of Oswald Mosley and Stanley Baldwin. He was commissioned to paint the portrait of the King of Egypt (1923-1924). However, he exhibited most flare when painting portraits of black men which he did throughout his life. One of the best-known black models was Henry Thomas who was also Glyn Philpot’s manservant for several years.

Glyn Philpot was generous and gave advice, money, and support to a number of young artists including Wilfred Owen’s brother Harold to whom he had been introduced by Siegfried Sassoon. In 1923, at the age of 38, Glyn Philpot was elected a Royal Academician. Throughout the 1920s he travelled and worked in the US, Europe, and North Africa and undertook religious and history painting. His themes increasingly included male nudes.

In 1930 he sat on the Award Jury of the Carnegie International Exhibition and met Henri Matisse who was a co-juror. A gold medal was awarded to Picasso. Glyn Philpot subsequently, when in his late forties, changed his approach to painting and lightened his palette and simplified and stylised his compositions. In 1931 he took a studio in Paris. He met a young German, Karl Heinz Müller, and went with him to Berlin. This period produced a number of paintings in his new style. This change in style meant that his work became much less popular, and his portraiture dried up. His painting The Great Pan was rejected by the Royal Academy in 1933. However, he slowly won back favour and he had four one-man shows during the last five years of his life. He died suddenly at the age of 53 of a heart attack, in London. The day after Glyn Philpot’s funeral Vivian Forbes took a fatal dose of sleeping tablets. In 1985, the National Portrait Gallery staged a major retrospective. His works are held by the Tate Gallery, London, amongst other major institutions. 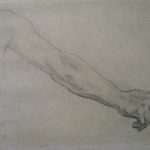 charcoal on paper, laid down to board, minor losses to lower corners 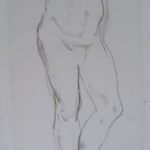 charcoal on board, marginal marks, light offsetting from previous mount 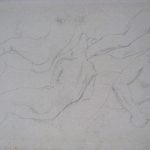 pencil on paper, laid down to board, minor marks 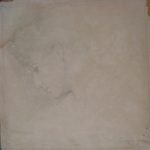 pencil on paper, laid down to board, staining, loss to lower corner and top edge

inscribed to the reverse ‘Gertrude Hilda Philpot drawn by Glyn Philpot at the age of 16 1/2years.’ 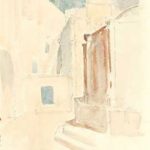 Watercolour over pencil on paper

signed and titled on reverse