Born in 1922, Fred Yates grew up in Urmston, a suburb of Manchester. His Career as an insurance clerk was cut short by the outbreak of the war and he served in the Grenadier Guards until 1945 when he returned to Manchester as a painter and decorator.

Untutored, but with tremendous self-discipline, he began to paint pictures of the rich industrial architecture of Manchester, the red brick terraces and the commotion and humour of street life – a theme that is apparent even in his most recent work. He subsequently enrolled on a teacher training course at Bournemouth College of Art and in 1950 won a travelling scholarship to Rome and Florence.

He taught for over twenty years battling continuously against artistic sophistication, for him, beauty resided in “simplicity and a child’s mind.” In 1969, Fred gave up teaching and moved to Cornwall to enable him to devote all his time to painting. While he still painted scenes, remembered from his childhood in Manchester, he also worked on sunnier landscapes.

His paintings are held in a number of private and public collections including Brighton and Hove Art Gallery, Liverpool University, The University of Warwick, Torquay Art Gallery and Russell Coates Gallery, Bournemouth. 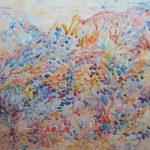 Watercolour on paper, signed and titled in pencil, additionally signed within the image in watercolour.