Eileen Agar was born in Buenos Aires in 1899 into a decadent world of house parties and balls. She was educated in England, and rapidly decided to pursue a career as an artist despite parental disapproval. She studied at the Slade from 1921 to 1924, alongside fellow students Oliver Messel, Cecil Beaton and Rex Whistler, then to break with her family with no means of support. It was not until 1936 that Agar shot to fame at the first International Surrealist Exhibition in London. Agar thereafter developed friendships with such luminaries as Ezra Pound, Picasso, Henry Moore and Paul Nash. She became a leading figure in British art, and is celebrated especially for her brightly-coloured collages.

This life drawing of a man sifting the grains of sand of time comes from Agar’s time as an art student at the Slade. She studied with the formidable’ Henry Tonks, and recalls being set to work drawing male and female models as well as copying classical busts’ with Tonks peering over [her] shoulder’. Tonks congratulated her on a particular head, calling Walter Russell over to have a look. Students gathered round and congratulated me’. Another of Agar’s teachers at the Slade was Wilson Steer, whom she recalls ambling into the life class  saying a few words and ambling out again.’ Agar, A Look at my Life (1988), pp. 43-4. She ever after respected the Slade’s old-fashioned but valuable teaching.’ This particular study is remarkable for its warmth and its honest detail demonstrating Agar’s draughtsmanship. It attests to the enduring power of classical training and highlights the skills of one of the best-known decorative Surrealist painters of the twentieth century. 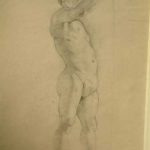 (with additional study of torso to lower corner of sheet)

signed and dated by the artist