Edward Burra was born on 29 March in South Kensington, London. He attended preparatory school but later had to be withdrawn due to illness. After studying art privately, he studied life-drawing, illustration and architectural drawing at Chelsea Polytechnic (1921-1923) and then spent two years at the Royal College of Art.

He travelled extensively in France and Italy and on his return settled in Rye, Sussex. His early work, in particular the ironic drawings of the people he met whilst travelling, were strongly influenced by the work of George Grosz. His first solo exhibition was held at the Leicester Galleries in 1929 and he exhibited with Paul Nash and other Surrealists during the 1930s. In 1933-1934 he travelled through North America and his paintings of that period reflect the culture and scenery of America and Mexico. Besides painting, Burra also designed scenery and costumes for a number of ballets.

He declined membership of the RA in 1963 after being elected but was created CBE in 1971. After breaking his hip in 1974 he never recovered and died in 1976. Retrospectives of his work were held at the Magdalene Sothmann Gallery, Amsterdam (1955); the Tate Gallery (1973); the Hayward Gallery (1985); Rye Art Gallery (1989). Examples of his work are held in the collections of the Tate Gallery; The British Council; The Imperial War Museum; The Government Art Collection; and the Sunderland Museum and Art Gallery. 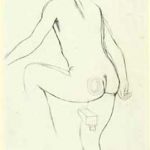 Study of a male nude

pencil on paper stamped with the signature