Edward Ashton Cannell was a British watercolourist born in the Isle of Man, where he attended art school before going to the Liverpool College of Art. He taught at the Isle of Man School of Art and also at various London schools. He has carried out various commissions for British Petroleum, Foyles and Cassells and his work features in the Government Art Collection. He was a member of RSMA, London Sketch Club, the British Watercolour Society and Wapping Group. He has exhibited at the Royal Academy, The Linda Blackstone Gallery, the Archer Gallery and Paris Salon, where he won a silver medal in 1973 and a gold in 1975. Both watercolours are signed with only the first part of his surname (he signed himself Ashton Cannell in later life). These watercolours thus date from the earlier part of the artist’s career. 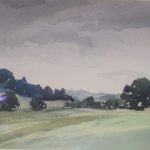