Deirdre Edwards was born in Shanghai China. She spent much of her childhood in the Far East and the USA. Between 1968 and 1969 she attended Guildford and Farnham Art Schools. She completed a Foundation and Fine Art Course from 1970 to 1973 and attended the Central School of Art, London in 1973. She went on to receive a B.A . in Fine Art Painting, (First Class Honours from 1980 to 1993.) 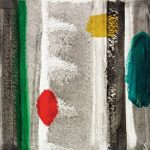 Acrylic and Aquacryl on canvas

signed and titled on reverse

Acrylic and Aquacryl on canvas 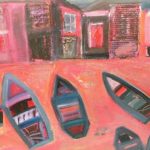 oil and collage on board, signed